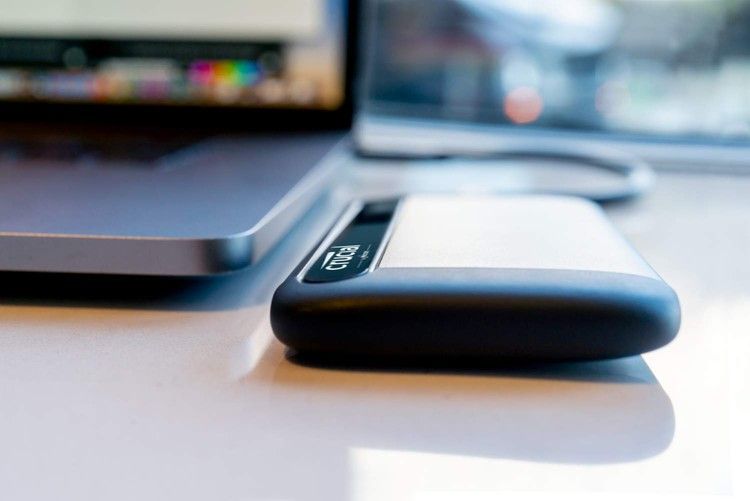 External drives can be a bottleneck for any file transfer because they often don’t match the speed of internal storage, and they use a connection technology with limited bandwidth.

With the advent of USB 3.2 and Thunderbolt 3, those bandwidth issues are resolved, allowing for NVMe specification SSDs to be externally connected.

The packaging for the X8 is the same inexpensive cardboard box with a thin clear plastic tray concept that Crucial uses on all its SSDs. We mention this only because it seems entirely at odds with the device, which if it was made by Apple would come in a massively over-engineered packaging in reverence to its elegant engineering.

The new X8 is a gloriously simple smooth black lozenge shape, not entirely unlike a Mark VII photon torpedo, with most of the structure being a thick metal tube that is cool to the touch.

The ends are a silicon over-mould protecting it from being dropped from up to 7.5 feet, according to the makers.On the top and bottom are what look like two inset pieces of black glass on which the Crucial logo, capacity and various standards flags are marked.

What appears missing is any LED to indicate activity, although using it with a computer would usually provide some feedback on the screen.

It’s easy and cheap to take a 2.5-inch SSD and place it in a cheap external USB 3.0 connecting box to make a fast portable drive. But, the limitations of the SATA bus on the drive, and the bandwidth limitations of USB 3.0 will cap the speed of the drive at 400-450MB/s for both reading and writing, even with the very best caddy and SATA SSD.

The new X8 isn’t like this at all, because the SSD inside is an NVMe PCIe design made for much higher performance, and the external bandwidth issue is addressed by using Thunderbolt 3 or USB 3.2 Gen 1.

In this configuration, it should allow the drive to read and write in excess of 1,000Mb/s, which isn’t remarkable by internal NVMe standards, but blindingly quick for an external drive.

At 25 cm long it isn’t overly short and comes with a Type-C connector for the drive and a Type-A variety at the computer end. But, you can pull the Type-A converter off and reveal another Type-C end.

Separate cables would have been better, as most users will assume that the performance of both ports is the same. Depending on the port specification, it can be radically different.

And, another minor point is that the cable is rated for USB 3.1 Gen 2 operation, but it doesn’t have the correct logos that indicate this spec.

While the cable might not be perfect it can be used with any PC or Mac with USB, the Sony PlayStation 4, Xbox One or Apple iPad Pro.

Although, as we’ll talk about later, being able to connect and use the drive isn’t the same as getting the most out of the technology that Crucial put inside.